No downfall of world

Genesis 9:12-16: And God said, This is the token of the covenant (solemn pledge) which I am making between Me and you and every living creature that is with you, for all future generations: I set My bow [rainbow] in the cloud, and it shall be a token or sign of a covenant or solemn pledge between Me and the earth. And it shall be that when I bring clouds over the earth and the bow [rainbow] is seen in the clouds, I will [earnestly] remember My covenant or solemn pledge which is between Me and you and every living creature of all flesh; and the waters will no more become a flood to destroy and make all flesh corrupt. When the bow [rainbow] is in the clouds and I look upon it, I will [earnestly] remember the everlasting covenant or pledge between God and every living creature of all flesh that is upon the earth.

The coming of the son of man HaMashiach in the clouds

Daniel 7:13: I saw in the night visions, and behold, on the clouds of the heavens came One like a Son of man, and He came to the Ancient of Days and was presented before Him.

Mark 13:26: And then they will see the Son of Man coming in clouds with great (kingly) power and glory (majesty and splendor).

The third part on earth is destroyed!

Unlike God, Satan seduces the humanity to the downfall of world of God. That’s the lie. Does God want the total destruction? No. Only the humanity destroys the world itself. The third part is already destroyed today. Read in Revelation 8 and 9.

The third part is interpreted as follows: 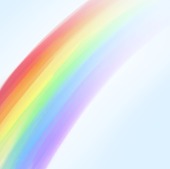 Revelation 20:1-3: THEN I saw an angel descending from heaven; he was holding the key of the Abyss (the bottomless pit) and a great chain was in his hand. And he gripped and overpowered the dragon, that old serpent [of primeval times], who is the devil and Satan, and [securely] bound him for a thousand years. Then he hurled him into the Abyss (the bottomless pit) and closed it and sealed it above him, so that he should no longer lead astray and deceive and seduce the nations until the thousand years were at an end. After that he must be liberated for a short time.

The last times of the prophecies have already been described, click in Rapture and tribulation prophetic?

After the fulfillment of the prophecies and after the grace period of 70 years Israel (1948-2018) comes HaMashiach and governs Shalom for 1000 years in the 7th Millennium of God. All malice is eliminated.

The time is approaching, on the 1st Nissan 6000 of God begins the 7th millennium, see and click in The truth of the divine calendar and Millennium 6000 מילניום.

Very seldom is Israel in stability from 1948 to 2018 for 70 years. Three thousand years ago, King David ruled Israel for only 33 years and his son Solomon reigned for 40 years. Then, unfortunately, Israel was divided in two parts and later dispersed. This story teaches us that until today Israel has hardly succeeded in living in peace. But Israel was restored in 1948 and is a living fig tree of 70 years. Jerusalem was conquered and restored in 1967. Now Jerusalem is 50 years old. The way is clear for the coming of Yeshua HaMashiach to Jerusalem. Jerusalem is the capital of Israel and prophetically a city of peace for all nations, only when Jeshua Hamashiach comes and rules for a thousand years in peace.

When will the Eternal King Jeshua HaMashiach come?

But we should pray when He comes and changes the world, then we will live with Him in a thousand years of peace. Yes, it is unimaginable. May we say Hallelujah and AMEN?